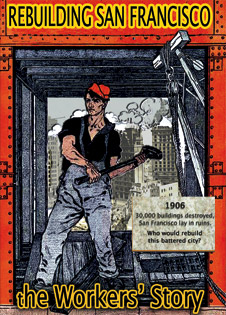 REBUILDING SAN FRANCISCO is available on DVD for $19.95.

In the weeks following the 1906 Earthquake, thousands of tradesmen – piledrivers, ironworkers, bricklayers, electricians, plumbers and countless others, converged on San Francisco. Never before had such numbers assembled in one area. These workers would rebuild San Francisco. Using their bare hands and simple tools, they constructed one of America’s most beautiful cities. After a hundred years, we hear their story.

For educators, see our teacher's companion guide for viewing.